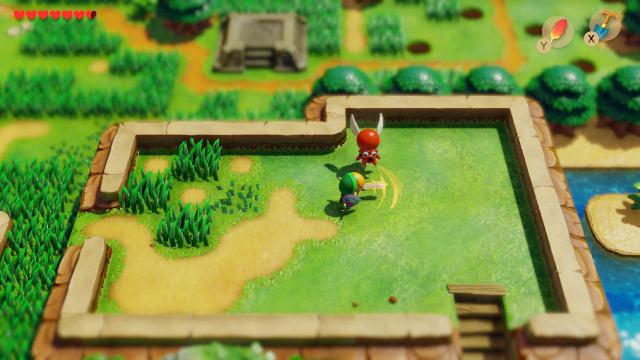 Nintendo has a big year in 2019, as the console and game maker released strong first-party exclusives like Pokemon Sword and Shield, Super Mario Maker 2, and Luigi's Mansion 3. They also released a remake to the classic Game Boy game The Legend of Zelda: Link's Awakening, which is having a nice little price drop for Cyber Monday 2019.

What's fascinating about Link's Awakening on Switch is that it's a full remake of the original, accurately recreating locations, dungeons, and boss battles with a new visual style. This game not only offers a nostalgic revisit for long-time fans, but it's also a stellar way for recent newcomers to experience one of the series' finest entries. The Zelda remake earned an impressive 8/10 in GameSpot's Link's Awakening review.

"If you haven't touched a classic Zelda game in a while, Link's Awakening will almost instantly transport you back to the '90s," wrote Peter Brown. "It's simple, in many ways, but the orchestrated journey still conveys a sense of adventure, and this new version is without question the best way to experience it. And more than anything else, it will put a smile on your face. Remakes are a dime a dozen nowadays and often easy to overlook. Don't make that mistake with Link's Awakening."

As a first-party Switch game that released just a few months ago, Link's Awakening deals are still few and far between. That said, you can still find the game for little over $10 off its original launch price of $60. The best deal is currently at Ebay, where you can get a brand-new copy with free shipping for $47. You'll find similar deals at Walmart and Rakuten.

To coincide with the release of Link's Awakening on Switch, Nintendo also released a new Amiibo modeled after Link's appearance in-game--and it's downright adorable. This iteration of Link can be a bit hard to find online, but you can currently find it for $16 at GameStop. For comparison, it's a whopping $31 at Amazon.